The All Children Reading (ACR)–Cambodia is a 4-year USAID early grade reading program implemented in Kampong Thom and Kampot regions by RTI, with additional support from the Global Partnership for Education (GPE) to fund the work of the Ministry of Education, Youth and Sport (MoEYS) in Siem Reap.

The goal of the activity was to help the MoEYS develop and pilot a national early grade reading and mathematics program in pre-school and grades 1 and 2. The 2019 Early Grade Reading Assessment (EGRA) represents the baseline (first) assessment of the program. 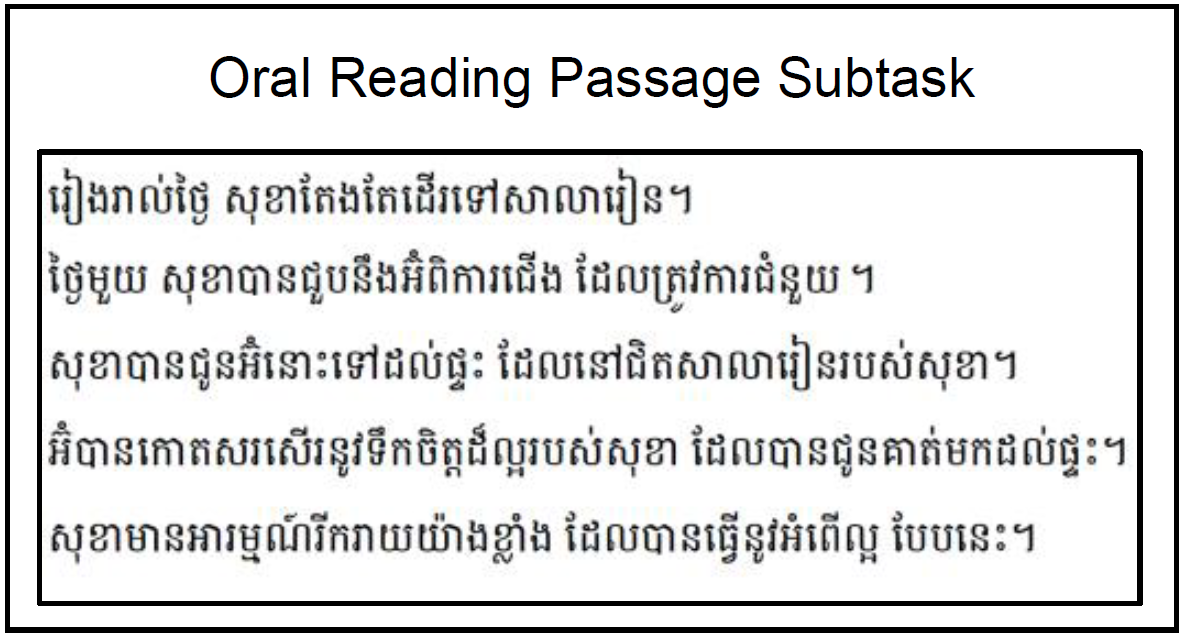 The oral reading fluency (ORF) subtask measures how quickly and accurately a student can read. It is a core component of EGRA because it brings together lower-level reading skills (such as decoding and familiar word recognition) with how quickly and easily the student can read a given word (called automaticity). Students are given a short, 61-word, written passage on a familiar topic and were asked to read it out loud “quickly but carefully.”

The Extended ORF subtask follows the same approach as the ORF, but the students are given more than 60 seconds to read. In this EGRA, students were given 3 minutes. If the child could not read any of the first seven words in the passage, they were told to discontinue the test (and were given a score of zero words read). The EGRA administrator times the student, making note of any mistakes the student made while reading the words aloud. The score is reported as correct words per minute (cwpm), calculated using the longer duration rather than coming from the first 60 seconds of reading.

The students were presented with a grid of 100 letters they were expected to learn by the end of grade 1 (including all types—regular consonant, consonant subscript symbols, dependent vowels, and independent vowels) in random order. For Khmer, this includes the full range of types of letters students are exposed to in the early grades, including subscript forms of the consonants, dependent and independent vowels. Students are asked to read out loud as many as they can, as quickly and carefully as they can, in 1 minute. The EGRA administrator time the child, making note of any mistakes the child made while calling out the letter names. The score is reported as correct letters per minute (clpm).

The consonant identification subtask tests students’ ability to recognize consonants and their names. In contrast to the regular letter-naming subtask, for this subtask, students are asked to read all consonants (they are not stopped if they cannot read any in the first line).

Students were presented with a sheet listing al 33 consonants and asked to read out loud as many as they can, as quickly and carefully as they can, in 2 minutes. The EGRA administrator timed the child and recorded the number of correct consonants per minute. The score represents the percent of consonants in Khmer that were correctly identified. 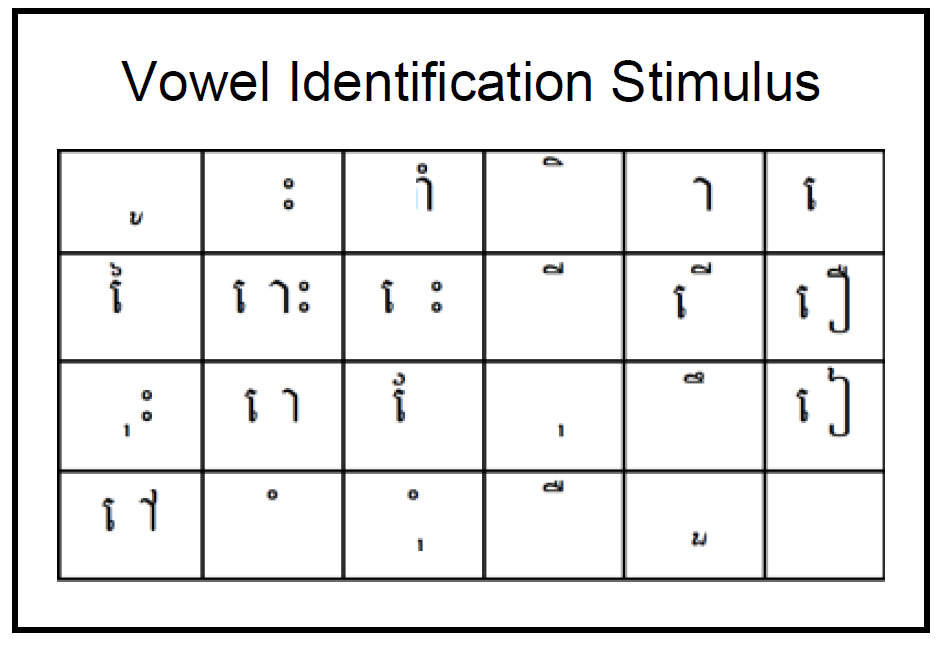 The vowel identification subtask tests students’ ability to recognize vowels and their names. In contrast to the regular letter-naming subtask, for this subtask, students are asked to read all vowels (they are not stopped if they cannot read any in the first line).

Students are presented with a sheet listing 23 dependent vowels and asked to read out loud as many as they can, as quickly and carefully as they can, in 2 minutes. These are the most common of vowels in Khmer, and the ones that students in grade 1 learn first. The EGRA administrator times the child and records the number of correct vowels per minute. The score represents the percent of vowels in Khmer that were correctly identified.

The students were presented a list of 50 familiar words drawn from grade 1-3 textbooks. They were instructed to read aloud as many words as they could in 1 minute. The EGRA administrator timed the student, making note of any mistakes the student made while reading the words aloud. The score is reported as correct words per minute (cwpm).

This subtask is paired with the Extended ORF subtask. After completing the Extended ORF subtask, the EGRA administrator asked the student 5 comprehension questions that corresponded to the passage. Unlike the basic reading comprehension subtask, it does not matter how far in the passage the student reached: all questions are asked of every student. 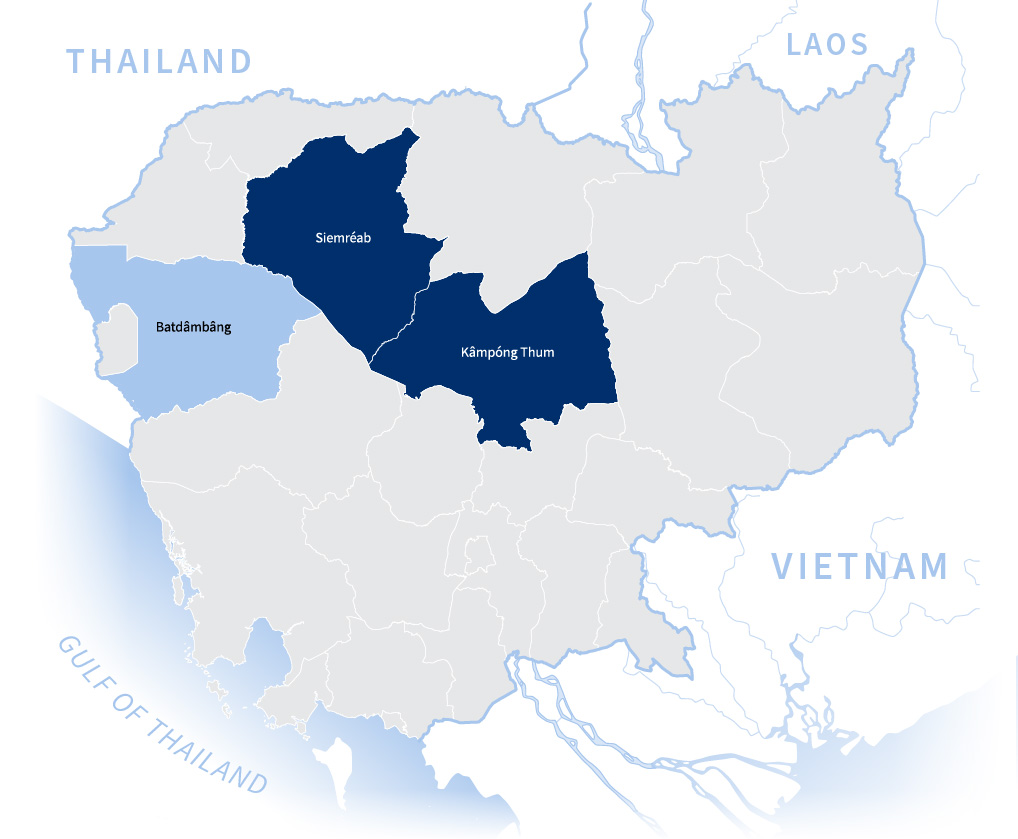 ACR-Cambodia activities included improved teaching and learning materials for early grade literacy and mathematics, and training and ongoing support for teachers to improve their capacity to deliver quality classroom instruction. The program was implemented under a roll-out design, initially providing support for pre-primary and grade 1 literacy, adding grade 2 and mathematics support in later years.

EGR Barometer data for ACR–Cambodia were collected in 2018, 2019, and 2021. Data analysis shows the impact of the program on students in grades 1 and 2.

Improvements to instruction in grade 1 were piloted beginning in two provinces at the start of the 2018–19 school year, Kampong Thom Province and Siem Reap Province. Schools located in Battambang Province serve as the controls for the intervention.

The sample was drawn to have a large enough number of schools and students within each treatment arm, including the control group, to ensure that the impact evaluation could detect a minimum detectable effect size of 0.25. Sampling was done in two-stages; firstly, schools were selected at random within each treatment group proportional to their size (number of students) and then in each sampled school, up to eight students were selected at random per grade. The baseline study was conducted in June 2018 and this follow-up study was conducted in June 2019, month 8 of the 10-month school year.

More detailed information about this implementation of EGRA, the specific measures assessed, and the sample design may be found in the All Children Reading-Cambodia, Student Performance in Early Literacy: Baseline Report.